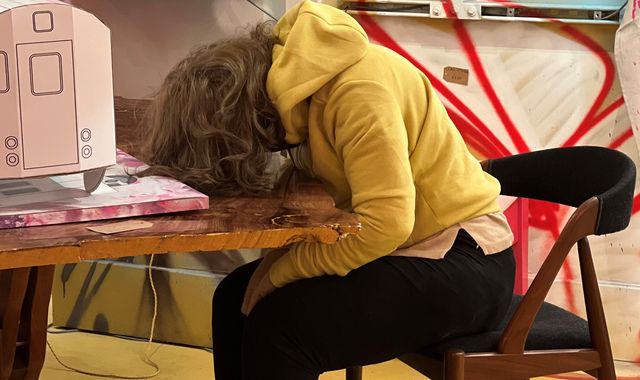 Police broke down the doors of a London art gallery to save a woman slumped unconscious over a table - only to discover she was made of packing tape and foam filler.

The lifeless woman they had been trying to save was in fact an art installation entitled 'Kristina' which is on display at the London gallery.

The work was commissioned by Steve Lazarides, Banksy's former agent and the dealer behind Laz Emporium.

Mr Lazarides said: "Hannah who was working in the gallery that day had just locked up and gone upstairs to make a cup of tea.

"She came down to find the door off its hinges and two confused police officers!"

London's Metropolitan Police were responding to a call about a "person in distress" at the gallery on the evening of 25 November.

"Officers forced entry to the address, where they uncovered that the person was in fact a mannequin," a police spokesperson told Artnet News.

The installation features a woman wearing trainers and a yellow hoody slumped face forward in a bowl of soup, her long blonde hair concealing her face.

The realistic sculpture is by American artist Mark Jenkins and is based on Mr Lazarides' sister.

This is apparently not the first time the installation, which sits in the gallery window, has caused trouble. In October, paramedics were called to assist the woman, Artnet News reported.

(c) Sky News 2023: Police break into gallery to rescue 'unconscious' woman - who turned out to be an art installat