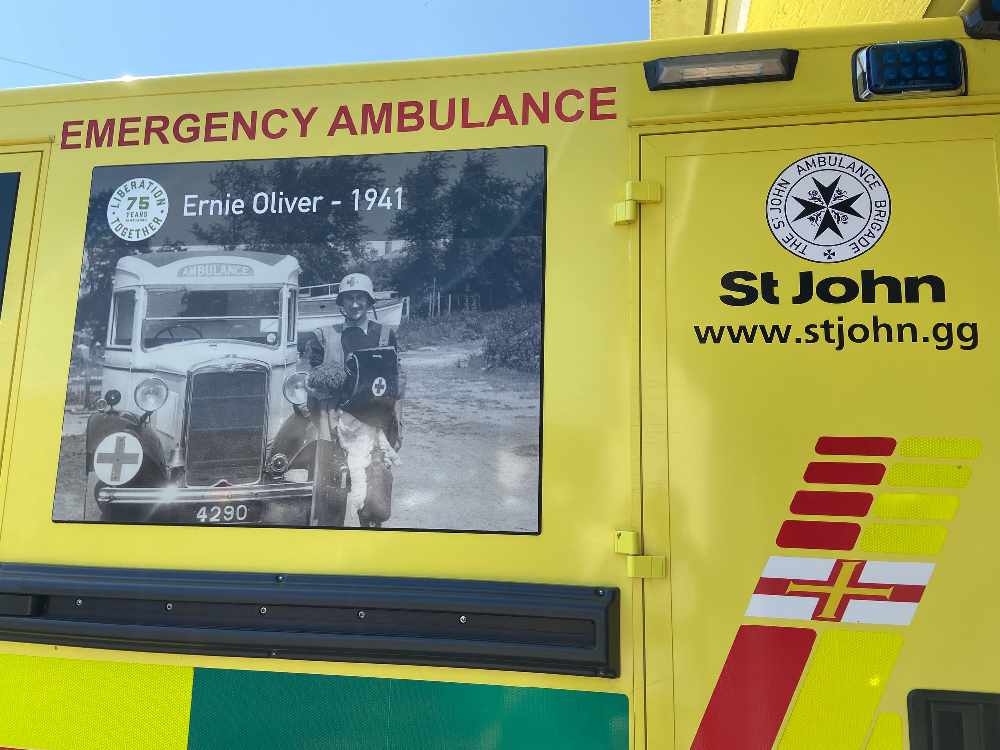 St John Ambulance Guernsey has redesigned one of the emergency vehicles using old photos depicting the ambulance service during the German Occupation.

The photographs were taken by Reg Blanchford, a founder member of St John in Guernsey and keen photographer who took photos during the Occupation on a camera which he hid from the Germans.

One of the photos shows St John Transport Private Charlie Froome and St John Ambulance Brigade member Lionel Taylor wearing white tin hats and holding the rear door of an ambulance which had been severely damaged by shrapnel during the fatal bombing of the White Rock in June 1940. Both men were injured while trying to rescue casualties from the White Rock.

The second image is of Ernie Oliver standing next to a wartime ambulance in 1941. Ernie, who was a carpenter by trade, became a full-time member of the Ambulance Transport Section in 1941 having been a member of the Brigade for some time. When he wasn’t on duty in the ambulance he also helped maintain the ambulance station.

The designs were planned and prepared before the current coronavirus crisis and it had been hoped that the ambulance would have formed part of the Liberation Day cavalcade on 9 May. The St John logos on the front and sides of the vehicle have also been replaced with the badge which was use by the St John Ambulance Brigade during the war.

Chief Ambulance Officer Mark Mapp said: “We wanted to commemorate Liberation 75 and celebrate the history of St John in Guernsey. It is important that we can reflect on our heritage and remember the service, dedication and sacrifices made by our predecessors. I think it also provides an opportunity for our crews of today to reflect on the challenges and hardships experienced during the Occupation. St John played an important role in supporting the island through the war years and adapted to the changing needs of the community, just as it is doing today.”

St John continued to provide medical care and ambulance transport throughout the Occupation. The service was also responsible for distributing the food parcels that arrived in Guernsey towards the end of the war on the Red Cross ship SS Vega.

The photographs are all featured in the book Guernsey’s Occupation Ambulance Service, written by Gary Blanchford, the son of Reg, who went on to become Chief Ambulance Officer.