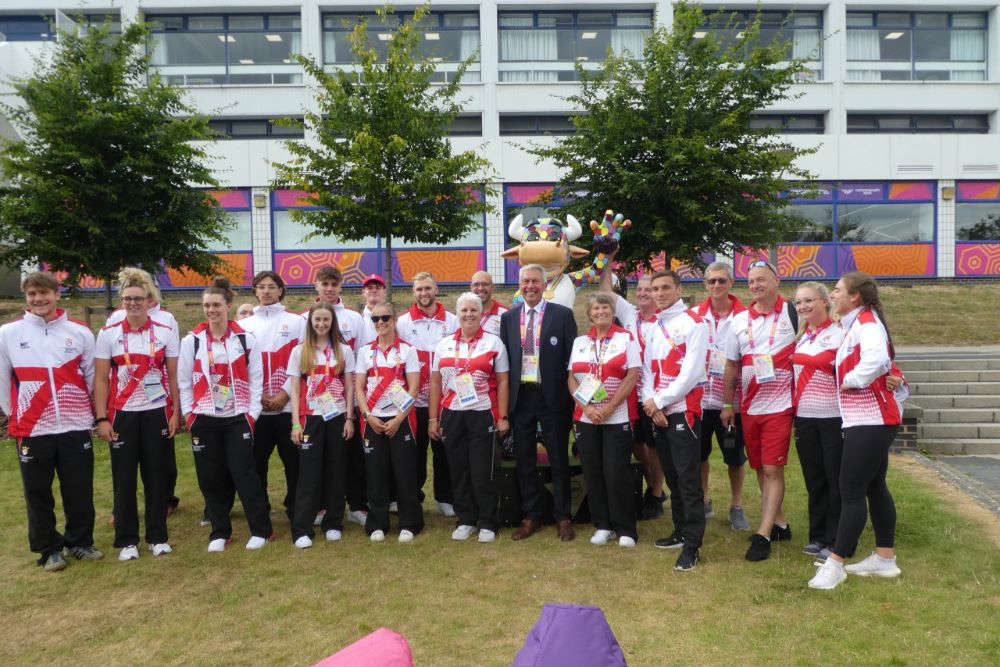 Jersey's athletes at the welcome ceremony.

28 athletes will represent Jersey across eight different sports at the Commonwealth Games, which gets underway today with the opening ceremony.

It's taking place in Birmingham, with the ceremony due to get underway at 8pm.

More than 5,000 athletes from 72 nations and territories are taking part in the games over the next 11 days.

The Team Manager and vice-president of the Jersey Commonwealth Games Association, Morag Obarska, says the atmosphere is really building up.

"I think they just can't wait for the competition. They're testing out their training venues, testing out the transport to get to the events, so once they get into the real competition it'll be really exciting.

If they come back with a great percentage, a gold, or a PB (personal best) or however it works, it's tougher in knockout sports where you might get a tough draw, but just perform to their best.

As management, from my perspective, I want to make them as comfortable as possible, get them to their venues as easy as possible, so they just focus on their event."

The 28-strong Jersey team is:

"We know quite a few and I'm sure there's lots that we don't know about travelling from Jersey and also people in the UK that have Jersey connections.

I think the support will be amazing and that is such a boost in any sport to an athlete having that buzz around with people shouting for Jersey."

Team Jersey joined Guernsey and Zambia at a welcoming ceremony in Warwick.

Jersey's Chef de Mission, Jean Cross, presented a silver milk jug to the mayor of their village, David Moorcroft OBE, which is a tradition.

The government says they will develop links with Commonwealth member states on a range of shared interests, as well as support the island's athletes.

"Jersey has a fantastic sporting tradition and I’m delighted to attend my first Commonwealth Games to show support for our athletes as they compete with the best from around the world.

We have some talented athletes who will be doing the Island proud over the next two weeks, and I would like to thank Jersey Sport and Jersey’s Commonwealth Games Association for their continuing support for Team Jersey, and the years of preparation that have gone into Birmingham 2022.

This is also a valuable opportunity for me to meet with our Commonwealth partners, and I’m looking forward to attending the Commonwealth Games Business Forum, which brings together political and business leaders. It is important that Jersey is represented at these events, where we are on an equal footing with larger nations such as Australia, India, South Africa and Kenya – many of whom are key overseas partners for the island."

Deputy Lucy Stephenson, as the Sports Minister, has attended the 10th Commonwealth Sports Ministers meeting to talk to other Ministers about 'creating an inclusive and resilient sports sector.'

"Our mission is to increase the physical activity of Islanders by 10% by 2030. Not everyone will have the ability and dedication needed to reach the level of the athletes at the Commonwealth Games, but I hope that Jersey’s squad will be an inspiration to all islanders, not only to watch, but to get out and get involved too."

Great to stand shoulder to shoulder at this event with colleagues from the UK @HuddlestonNigel and Isle of Man @VOTEJulieEdge and so many others from around the Commonwealth 🇯🇪 @GovJersey https://t.co/iPbhqqRikN