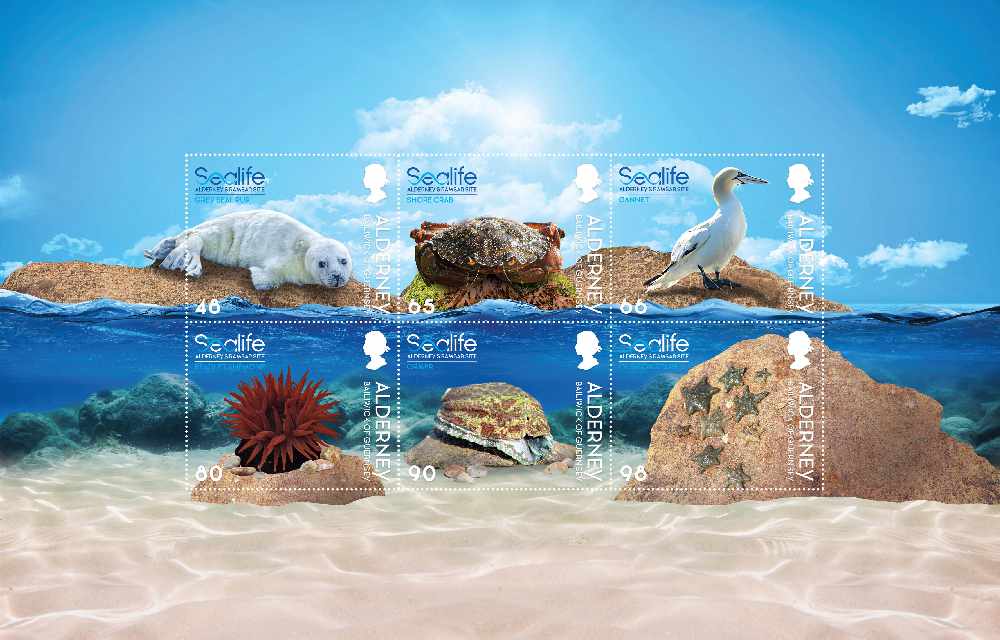 Guernsey Post is releasing stamps depicting species of sea life found in the Ramsar designated area of Alderney and Burhou,

Bridget Yabsley, head of philatelic at Guernsey Post said: - “Alderney’s west coast and the Burhou islands were recognised as a wetland of international importance in 2005, when they became the first designated Ramsar site within the Bailiwick. The area’s
unique tidal streams, with speeds of up to six knots at spring tides, encourage a vibrant and diverse marine environment, as depicted across our vibrant stamps.”

The stamps are as follows:

48p – The Grey Seal Pup (Halichoerus grypus) can be spotted in the water when they come to the surface to feed, rest and breed, particularly around Burhou and on the north-east of Alderney. They are most commonly seen when resting on land during the
day, particularly at low tide.

65p – The Shore Crab (Carcinus maenas) is the most common crab encountered on Alderney’s shores. Normally a green-ish colour, shore crabs are easily found in rock pools or on the end of crab lines dangled into shallow waters. They will feast on anything and everything they come across including seaweed, mussels, barnacles and even smaller crabs.

66p – Gannet (Morus bassanus). With a wingspan of up to 192cm, these large seabirds are white with black wing-tips, a yellow head and bright blue eyes. They are powerful hunters that can plunge dive into the water at up to 62mph, folding their wings against
their bodies to make a streamlined shape.

80p – Beadlet Anemone (Actinia equina). A close relative of the jellyfish, dark red beadlet anemones resemble blobs of jelly clinging to rocks. Territorial and aggressive predators, they have up to 190 tentacles arranged in six circles, which they use to catch prey including shrimps, crabs and small fish.

90p – Ormer (Haliotis tuberculate). Ormers are large molluscs with flattened ear-like shells and a tight spiral at one end. They are lined with respiratory holes along the edge of their shells. They can be found in the lower regions of intertidal rocky shorelines and
sub-tidal environments.

98p – Cushion Stars (Culcita novaeguineae). The aptly named cushion starfish species has a compressed, cushion-like shape and only grows up to 50mm. It is greenish brown and mottled, with variable colours. This species has a seven-year lifespan and change
sex from male to female at around four years old.