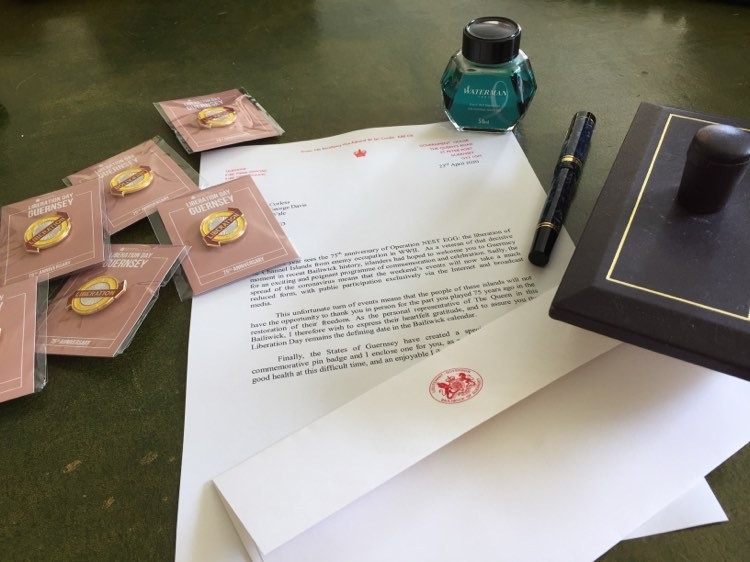 Veterans who had been due to visit Guernsey for the 75th anniversary receive letters of thanks.

The six veterans of Operation Nest Egg, the liberation of the Channel Islands in May 1945, had each made contact with the Island with a view to being present at the commemorative events on 9th May.

They included Mr Stuart Snow, a former member of the Royal Navy who now lives in Australia, along with Mr Joe Coreless, a former Royal Marine from South Wales who saw action as a landing craft coxswain on both D-Day, in Normandy, and on 9th May 1945, in Guernsey.

The Lieutenant-Governor has sent each of the veterans a personal letter, enclosing a commemorative 75th anniversary pin badge, to thank them on behalf of islanders for the part they played 75 years ago in the restoration of their freedom.

Major Marco Ciotti, Chief of Staff to the Lieutenant-Governor, explained: ‘These men were part of a decisive moment in recent Bailiwick history and it would have been particularly poignant for them be here for the 75th anniversary. Sadly, the current pandemic has ruled that out, so His Excellency has personally expressed his gratitude to them on behalf of all islanders, and assured these veterans that Liberation Day remains the defining date in our calendar.’

Major Ciotti added: ‘His Excellency has already received a reply from one of the veterans, who lives in the Wirral and served in the Royal Navy during the Second World War, to pass on his thanks for the 75 th anniversary badge.

A special team from the Guernsey Branch of The Royal British Legion had made arrangements to host the visit of the five UK based veterans, some with partners who were to have been accompanied by serving Army nurses. Plans were in place for them to view the Liberation cavalcade and celebrations from a special spectator stand on St Peter Port seafront, close to the Information Centre.

The Guernsey Troop of the Jersey Field Squadron Royal Engineers had joined forces with The Royal British Legion to bring Mr Coreless to Guernsey from South Wales.

Lieutenant Ollie McCaul, a member of Guernsey Troop, said the Troop was well placed to assist: ‘Guernsey Troop forms part of the Jersey Field Squadron, which, in turn, is a sub unit of the Royal Monmouthshire Royal Engineers. Our Regimental HQ is therefore in South Wales, giving us a unique geographical footprint that was perfect for managing Mr Coreless’s journey from Bridgend to Guernsey. It would have been a privilege to meet all the veterans but, sadly, it wasn’t to be. However, we were really delighted to have been part of the planning for the 75 th anniversary.’

The Royal Monmouthshire Royal Engineers had arranged to drive Mr Coreless and his carer from Bridgend to Bristol, where Guernsey airline Aurigny was set to provide complimentary return flights to Guernsey. Both passengers were to have been personally escorted by Captain Terry Musgrove, an Aurigny pilot who is also a local Reservist Royal Engineer Officer and Guernsey Troop Commander.

In his letter to the Liberation veterans, the Lieutenant-Governor explained that public participation in the 75th anniversary would now be exclusively via the Internet and broadcast media. Mr Snow will form part of the revised online schedule of events on Saturday 9th May, when he talks about his involvement in Guernsey’s liberation in a recent interview recorded in Australia, to be streamed at 12.20 p.m.

Details of how to view the 75th anniversary programme of events online are being shared with the veterans and their families.