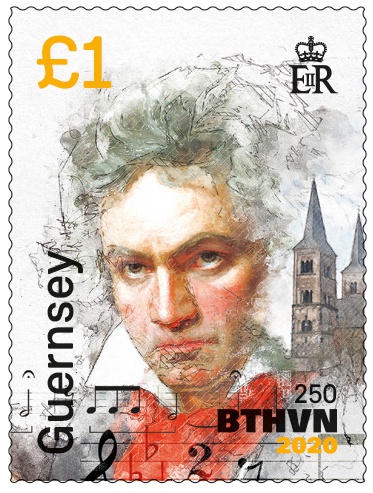 Guernsey Post is delighted to announce the release of the second stamp in its commemorative set.

Guernsey Post is delighted to announce the release of another special stamp which marks the 250 th anniversary of the birth of Ludwig Van
Beethoven, who is believed to be the most frequently performed classical music composer in the world.

The second stamp, to be released on 2 May 2020, depicts a painting of Beethoven by the German artist Josef Karl Stieler, along with the manuscript of the composer’s solemn mass, Missa Solemnis, in 1820.

Each of the four stamps depicts the great composer in different art forms, along with the logo BTHVN 1 - an abbreviation thought to have been used by Beethoven on some of his musical scores.

Bridget Yabsley, head of philatelic at Guernsey Post said: - “Beethoven is undoubtedly one of the most admired and influential composers who ever lived, so we are really delighted to be able to celebrate this special anniversary with our commemorative stamps.

“By releasing the stamps over the course of this year, we are hoping to encourage new collectors by providing them with the opportunity of collecting a small series.”